if anyone wants a peek, clicks images to enlarge 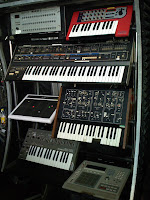 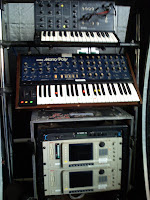 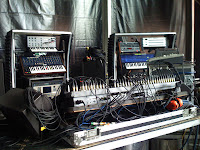 from some of the comments it sounds like they are not just for show either...

I've seen some of their shows and had the pleasure to meet them. What their show consist of is some of the vocals (duh), synth noises, and drums are on the akai 5000's. The MPC3000 sequences the show (not someone off stage pressing "play"), which Tom controls along with a mixing board. All those synths do get used, so there is a decent amount of improvisation to their shows. If you listen to a few of their live shows, you will begin to hear the variations right away. First of all, the samples they use come in separate tracks, which run through effects, so they can strip down a track to drums, add reverb/echo to it and so on. There are a couple of youtube videos which show them rehearsing for the show, in which you hear them testing each track. Unfortunately, I cannot for the life of me remember how to find the video of it. Anyway, if you do have a copy of one of their live shows or have seen them live here's the breakdown of a few of the things they do live, this is not 100%, but the best I have from watching the show, reading articles, and other detective work:

Nord Modular: Used on Don't Fight Control (the primal scream cover): you can pretty much find it by the crazy noise near the end of the song, sort of an LFO induced arpeggio.

Roland Octapad: Triggers samples, used in the majority of songs.

Octave Cat: Used on Block Rockin Beats. The keys were probably broken because they've been using this synth at every show and a roadie is bound to drop something.

Korg MS-10: Yeah, they haven't started using the DS-10 game yet. This is used between the end of the show and the encore, creating a heavy booming noise.

Elektron Machinedrum: Used on Galvanize, All Rights Reversed, Star Guitar, and a really heavy bit-crushed "boom-boom" noise during the middle of believe.

Roland Juno-106: Their first synth, they've only used it for the riff on Hey Boy Hey Girl (and occasionally you hear the typical old Juno problems occurring) as well as running it through a distortion pedal for Chemical Beats, sounds pretty amazing at the end of the show before the encore, almost like someone (Tom)is bashing an electric guitar.

Elektron Monomachine: The center-piece of Saturate, which they say the song was pretty much made by this machine. They add a theremin-like effect.

Future Retro 777: This thing is used heavily on the tracks Do It Again and Under The Influence, giving both a good distorted riff, impossible to miss on the tracks

DSI Poly-Evolver: Mainly used on Das Spiegel and A Modern Midnight Conversation for some arpeggios.

Octave Kitten: Tom plays a solo at the very end of the show in which he climbs up one of the rigs and starts tweaking this thing. It's technically broken, almost like they spilled some coffee on it and somehow the lfo tweaks everything. It'll definitely make you want for spend the money on a Kitten and break it.

Users browsing this forum: No registered users and 4 guests