hungry_manweaselbeast wrote:Bought the film recently, a joy to watch again after so many years.

I just bought it a couple months ago. I looooove the synths in that movie, sampled some of 'em too

I can't seem to find the tv series anywhere though...

hungry_manweaselbeast wrote:Bought the film recently, a joy to watch again after so many years.

I just bought it a couple months ago. I looooove the synths in that movie, sampled some of 'em too

I can't seem to find the tv series anywhere though...


I've had this movie for quite a while as well...lovely.

Nice find, I'd known Jockey Slut claimed to have an earlier interview but I could never track it down.


[wiki]Music Has the Right to Children[/wiki] was the issue's Album of the Week (boc bio) and included a number of quotes from other artists/industry folks (as taken from the old EHX page):

Mike Paradinas, JOCKEY SLUT, April/May 1998:
" I'm into what they do, in fact I actually tried to sign them to my label. The album sounds like a 70's wildlife documentary. That's a good compliment to pay them. They've definitely listened to the last Autechre album for the crunchy drums and the more minimal melodies. a lot of electronic music concentrates on the beats but they have very strong melodies instead. They use a 101 a lot but they make it sound good in the way Aphex does, rather than say The Shamen. Track 10, 'Roygbiv' is my favourite. "

Steve Beckett (WARP RECORDS), JOCKEY SLUT, April/May 1998:
" I find their nostalgia a strange and brilliant thing in electronic music. Another thing I love is that it works as an album from start to finish. That's still a rarity. When they play live they use loads of Super 8 footage of when they were young which works well with the children's voices. Favourite track? 'Aquarius'. "

Surgeon, JOCKEY SLUT, April/May 1998:
" Some tracks made me think of strange eastern European animation. Some weird line drawings that would go with the melodies and those children's voices. "

Rockitt (Ambient Soho/Dragon Disc), JOCKEY SLUT, April/May 1998:
" I'm a big fan. I love human voices like this in electronic music, though I was aghast at some of the production. It's like Kraftwerk meeting Autechre. The live bass was really cool too. The album's full of little hooks and short melodic ideas. I hope people give it a few listens because it is well worth it. You should get this album. "

hungry_manweaselbeast wrote:Here's a scan - it's not from the original issue, which I did have, but from the 10th birthday extra magazine which features their favourite moments and content. At 200dpi so you can see the original feature as well. 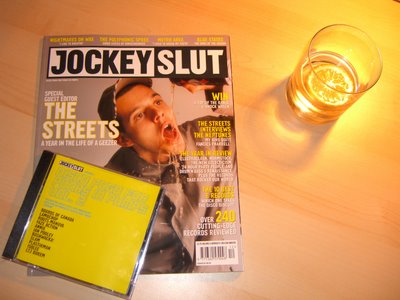 I just put this up on the wiki - [wiki]Board Clever[/wiki] - and I noticed there are a few slight edits (none from the quotes) from the original text. No doubt it was trimmed to layout in the anniversary supplement. Only a few sentence clauses removed here and there, I just thought it was curious.
Top
Post a reply
26 posts • Page 2 of 2 • 1, 2

Users browsing this forum: No registered users and 14 guests