mechanismj wrote:Mozart! Always quick on the draw with a .gif, you are.

Salutations! I feel as if it's been many moons ago since I've last posted here. I still lurk, though. Still been listening to the lovely music of Boards of Canada as much as ever. Even listened to Societas X this morning for the probably 150th time (crazy when you think about how that's about 300 hours).
Last edited by Mozart on Tue Jan 14, 2020 1:37 am, edited 1 time in total.
Top
Mozart
Tue Jan 14, 2020 1:36 am

I'm feeling it, guys. Something is going to happen this year. I know we've all been saying that, hell I think I was probably saying that about 2019, but for some reason which I can't quite put my finger on, I can just feel something is on the horizon. Whatever the hell they are working on is going to be a masterpiece, for they wouldn't have it any other way. Stay patient, friends. We could be there before you know it.
Last edited by Mozart on Tue Jan 14, 2020 1:37 am, edited 1 time in total.
Top
Mozart
Tue Jan 14, 2020 1:36 am 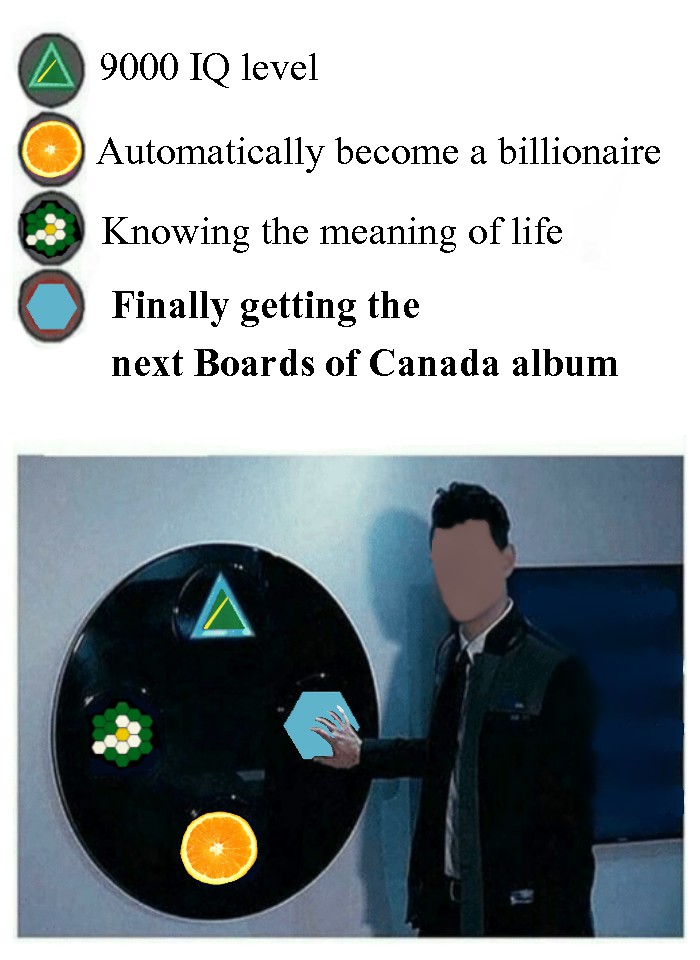 These little "likes" on twitter are common once in a blue moon for BoC, and I think it is their way of telling the hardcore fans (for who else actively checks their twitter likes? Certainly not the average fans or casual listeners) that they are hard at work polishing the touches on the next release. Time will tell. I've always held the opinion that some things are worth waiting for, though. I can't guarantee much in this life, but rest assured, this release will be worth waiting for.
Top
sixtyniner
Tue Jan 14, 2020 4:20 am

mechanismj wrote:Also, the thought of BoC actually using twitter is hilarious to me.

Yeah exactly lol. They seem to despise social media in general so it's hard for me to think they'd be regularly participating in it like this. Though they did actually use it at least once (or maybe someone at Warp posted it for them) to mourn David Bowie in 2016. The rest is news, retweets and likes which could very easily be done by a Warp employee.
Top
Sl Flk
Tue Jan 14, 2020 2:50 pm

Will there be another Boards of Canada release?

You know what... I've a horrible feeling that Boards of Canada won't release another album under this project. In fact I think they may have thought this way when they created 'the campfire head-phase. There is something about that album that sounds like they were saying goodbye. Obviously they went on to create Tomorrow's Harvest and it was extremely well suited to today's climate. Once again that album gives optimism towards the end, but then ends with absolute despair and dread.

BoC are very true to themselves and their followers. Although they take music very seriously, I don't think they've let the seriousness of their success affect them. They've rarely played live and I personally don't believe they will again. I think they see it as a bit of a bleak and pointless task, which would only serve as facade. They create music designed to interfere which your everyday thought process. But have they exhausted themselves? They are philosophers of sound and it would be really interesting to know about their own personal mental state of mind and political identity.

I once got into an argument about politics on this group and I explained that I believed that BoC's music has always expressed deep (although well hidden) political messages. References to the native Americans, 1969 and the Manson family murders bringing around the demise of that whole revolutionary movement of counter-culture, energy warnings, the attack on the branch davidians and the right to religious freedoms, drug references, mathmatical cues, there is an angle on virtually every track. They either care deeply about society or just love the study of it.

Tomorrow's Harvest was a message to all of us. A very stark warning of our place in history. It acted as a wake up call and offered a glimmer of hope.

The Societas X tape mix did exactly the same, the second to last track offered a glimmer of hope and a wake up call 'butterfly soon to fall, all is love, love is all. But the ending track of Christian Chevallier - Sea Cathedral seemed to summarise that society doesn't exist. Society is an illusion of constant changing rules and opinions. A mass of minds moving like tides across the biosphere. We can all have bright ideas, but in the end the planet wins. You are here and now, but one day you'll be over and consumed, just like everything else.

One day Boards of Canada will end and I very much doubt that they would announce it.
https://demoncityrecords.bandcamp.com/
https://www.youtube.com/channel/UCreDAp ... 2tnQnQhHRw
Top
SamuraiDrifter
Tue Jan 14, 2020 4:00 pm

People have been doing this kind of naysaying for a very long time, since well before Tomorrow’s Harvest came out, not to mention Societas X. There is absolutely no reason to think they’re done releasing albums. They said back in 2013 they have every intention to continue releasing music and they’re liking tweets to show fans they’re still active.

Personally I think if they ever quit releasing music or decide to end the band, they’ll at least mention it in an interview.
"They say that dreams are only real as long as they last. Couldn't you say the same thing about life?"

If we compare their activity from the past with now it actually hasn’t changed much other than there were a few moments of longer intermissions... but, we have had quite a few releases recently... 1 major LP, a handful of amazing re-mixes, a two-hour long epic old school mixtape! Imho, they are far from being done. I might be wrong, but, I have a deep feeling they are hard at work smashing keys, dismantling vhs recorders and spilling coffee! I think they realized how much people enjoy their craft.... especially with the hype and excitement/non-excitment for Societas X... they used a lot of older recordings.... I just know we will be surprised with something awesome! As always.
TH hit me deep in the best of ways.... it didn’t creep me out at all and I would say, judging by my itunes play count, that I have listened to it far more than any other release... still obsessed with it actually... in my mind it is their greatest release and I revere it like the holy grail of their material.... or a close tie with Geogaddi for me
lol just my opinion
https://soulslip.bandcamp.com/music
https://kevlarmusic.bandcamp.com
Top
Ottomatik
Tue Jan 14, 2020 10:30 pm

Mozart wrote:I'm feeling it, guys. Something is going to happen this year.

I'm with you on that one. When TH was released I was just getting out of a rough year of 24/7 studying for a selective exam for university, so it truly felt like a gift to have that at the end of the school year. Now 7 years later, I have a second shitty similar exam to prepare so I guess I'm naturally hoping for the same kind of gift next June

I'm really not buying the "they've stopped" theory either. I wonder if that longer-than-usual hiatus means that they've also been working on polishing their older stuff. A double release with both their old stuff and a new LP might be a lot to hope for, but who knows...
Top
Mozart
Wed Jan 15, 2020 3:35 am

Music Has the Right to Children (released 1998)

Mozart wrote:Music Has the Right to Children (released 1998)

We are definitely at that point. This wait seems a lot shorter than the one for TH did. Age, I suppose.

You know, if they were ever going to release old material, this would probably be the time to do it. Considering the recent Warp festivities and all.
Top
koroviev
Wed Jan 15, 2020 10:26 am

At the very least the 'A Beautiful Place Out in the Country' anniversary should warrant a tweet. My hopes are up.
Top
Mexicola
Wed Jan 15, 2020 11:04 am

You have no ideas how tempting it as to rename this thread the 'Clutching at orange hexagonal straws again' thread.

We love you all.

Mexicola wrote:You have no ideas how tempting it as to rename this thread the 'Clutching at orange hexagonal straws again' thread.

We love you all.

My straws keep automatically converting themselves from orange to turquoise.... no matter how many I clutch... lol lol. It must be some sort of sign... O.o
https://soulslip.bandcamp.com/music
https://kevlarmusic.bandcamp.com
Top
Valotonin
Thu Jan 16, 2020 10:17 am

but in all seriousness, keep up the speculation
it gives one something to be excited for in the coming year
Top
Sl Flk
Fri Jan 17, 2020 12:01 am

While you're all waiting patiently for the release of the new album. Here is a really good joke.


The wife told me to take the spider out instead of killing it. We went out, had a few drinks. He's a nice guy. Turns out he's a web designer.
https://demoncityrecords.bandcamp.com/
https://www.youtube.com/channel/UCreDAp ... 2tnQnQhHRw
Top
Mozart
Fri Jan 17, 2020 3:07 am

Sl Flk wrote:While you're all waiting patiently for the release of the new album. Here is a really good joke.


The wife told me to take the spider out instead of killing it. We went out, had a few drinks. He's a nice guy. Turns out he's a web designer.

This made my day

It's a good one isn't it. I've got another great joke for you too.

Users browsing this forum: No registered users and 3 guests